Where permitted, our local PatchMaster Drywall Repair Specialist is open for business and taking the recommended necessary precautions to protect our team and those we serve.
STATEMENT ON COVID-19 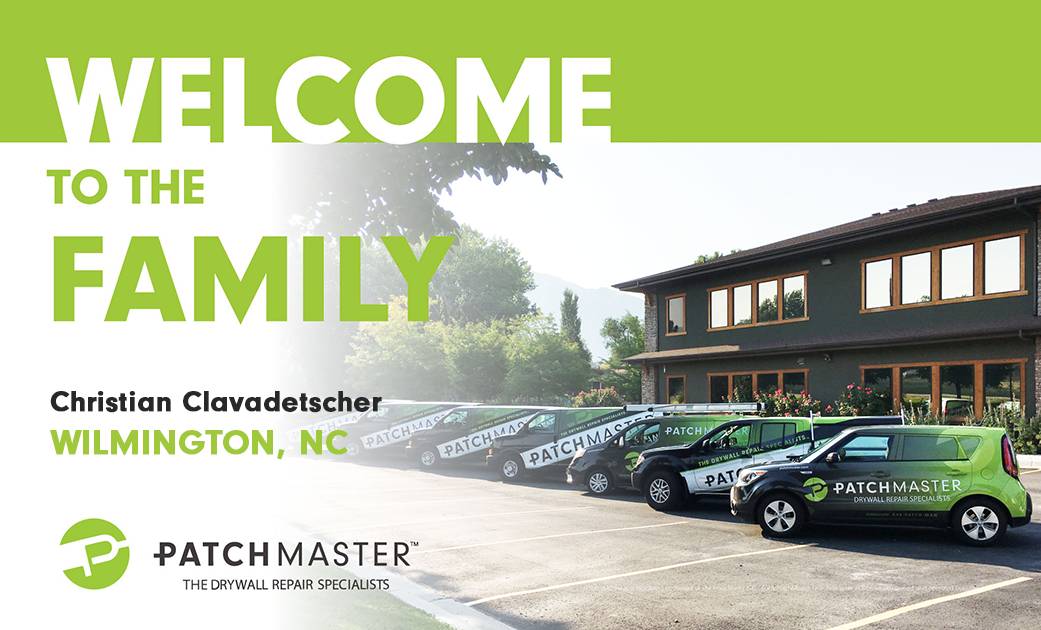 This specialty home services concept is sweeping the nation. Clavadetscher joins several other franchise owners in the Carolinas and is the first to open a PatchMaster on North Carolina’s southeastern coast.

“Having directed franchise development for several home service concepts, including PatchMaster, I learned firsthand the potential of this concept and the immediate need in our community for it,” said Clavadetscher. “I think this is an untapped market for services that are very much in demand.”

PatchMaster specializes in fixing holes caused by renters, plumbing leaks, and DIY projects that just can’t seem to get finished. In most cases, PatchMaster can complete the job in one visit.

Currently, PatchMaster has more than 50 franchisees signed in 94 territories with 29 franchises opened and operating. The franchise has opportunities for growth across Canada and the United States. The PatchMaster franchise system encourages military veterans to join its franchise, offering a 15 percent discount off the initial franchise fee to qualified applicants.

“We’re thrilled to have Christian on board with us to bring PatchMaster to a new region of North Carolina,” said Paul Ferrara, CEO of PatchMaster. “We love welcoming franchise owners who are determined and hard workers. Christian is multi-faceted in his skills, and that certainly plays to his advantage. We can’t wait to see him grow in his community.”

Clavadetscher plans to join local business organizations in the area to better his skill set to help the community. In his free time, he writes novels and music for fun and produces a podcast entitled “The Forward Curve” which discusses the commodity markets and the global economy.

PatchMaster Serving Cape Fear will cover the southeastern portion of the North Carolinian coast initially and could expand to the Myrtle Beach area at some point in the future.

The initial franchise fee for a PatchMaster franchise territory, which consists of a population up to 250,000, is $49,500 USD. Ongoing fees include a technology fee and a downward sliding scale for royalties starting at 9 percent. Franchisees attend a week-long training program at the company’s headquarters in Somerville, New Jersey.

PatchMaster is a low-cost franchise with a quick ramp-up period. No drywall experience is required for owners – PatchMaster provides all the training, tools and resources to learn the model and run the business. Franchisees have access to support for marketing, including digital marketing and social media, job pricing, hiring, managing technicians and financial management.